One of the most promising new treatments for erectile dysfunction is Low-Intensity Extracorporeal Shockwave Therapy (LI-ESWT, or “shockwave therapy”).

The treatment uses a device that administers low intensity sound waves to the penis in order to promote vascular regeneration. Dozens of clinical trials1 have shown it to be a safe and effective treatment for vascular erectile dysfunction (ED resulting from insufficient bloodflow).

The treatment is administered in a clinic using an expensive medical device (which can cost $30,000 or more). Patients usually receive several treatments per week, over a period of 6 to 12 weeks, and the total cost can be $3,000 to $10,000.

It’s important to note that LI-ESWT is not a permanent cure. Patients lose the beneficial effects after one to two years, and must repeat the process, making this a very expensive treatment option.

A southern California company, Launch Medical, has recently announced a new product, the Rocket, which allows men to administer LI-ESWT therapy at home.

We spoke to Dustin Wolff, a co-founder of Launch Medical, who stated that the Rocket uses the exact same treatment protocol (number of pulses, frequency, and intensity) as the clinical equipment. The company provides clear instructions – including online videos – on how to use the device, and how many sessions are required.

Launch Medical has tested the Rocket technology with hundreds of patients and seen significant improvements in SHIM scores. (They have not published an FDA-approved clinical study because the costs are prohibitive for a small company.)

The Rocket currently sells for $749.

Is It Too Good to Be True? 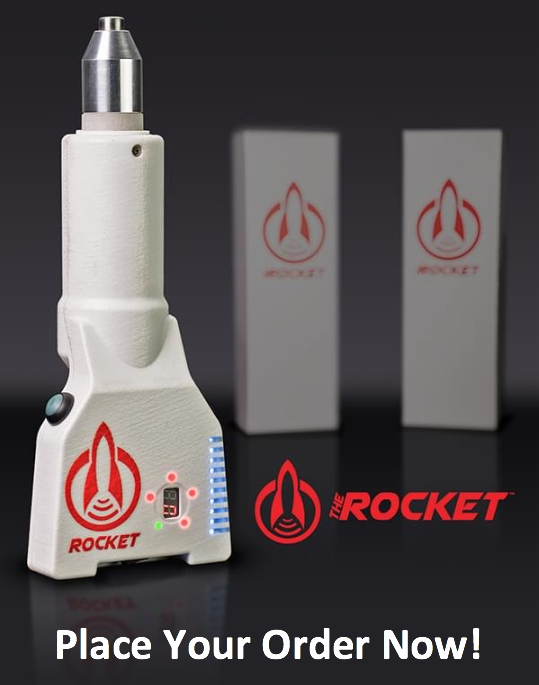 We asked Dustin how the company is able to sell the device for such a low price, when clinical shockwave devices cost tens of thousands of dollars.

The big difference is the amount of use the device will get. A clinical unit is used all day, every day, for weeks or months at a time between servicing. The home unit will only be used once per day, every few days, until the treatment is completed, so it doesn’t need to be “industrial grade.”

He also stated that the company has made several advances to improve and lower the cost of the device, and has filed three patents.

The Rocket brings the price of shockwave therapy down to an affordable point, and allows men to administer the treatment themselves in the privacy of their home. If the company can deliver on its promises, Rocket will be a revolutionary new option for men with ED.

The Rocket currently sells for $749. Shipping has been delayed due to the COVID-19 virus in China, which caused their factory to close. However, the factory is now back in operation, and the company expects to be shipping at full volume by the end of March.

As compensation for the shipping delay, the company is offering a second, free Rocket to everyone who has already ordered, or who orders by the end of the month. The second Rocket will be shipped one year after your initial order date.

Listen to the shipping update, and the free offer, on the company’s YouTube channel: https://www.youtube.com/watch?v=D8kjKROnHj4&feature=youtu.be

Any cookies that may not be particularly necessary for the website to function and is used specifically to collect user personal data via analytics, ads, other embedded contents are termed as non-necessary cookies. It is mandatory to procure user consent prior to running these cookies on your website.