Advertisement - see our Ad Policy
You are at:Home»Related Topics»Premature Ejaculation Causes and Treatment

Premature Ejaculation (PE) is a condition in which a man orgasms and ejaculates too soon, sometimes without penetration.

“Too soon” is a relative term – most men would like to last longer! The average length of time before ejaculation during vaginal intercourse is 5.4 minutes1. The International Society for Sexual Medicine officially defines premature ejaculation as consistently ejaculate within one minute of vaginal penetration.

There are a number of causes of PE, including diseases that affect the nervous system (such as diabetes or Parkinson’s disease), thyroid problems, or prostate disease.

It is most often caused by psychological factors. Studies have shown that men who anxiety disorders have an increased risk of Premature Ejaculation.

Counseling sessions with a qualified sex coach or therapist can help a man identify the triggers that cause a premature ejaculation, and gradual “defuse” the power of these triggers.

Another common treatment approach is training. Men perform a variety of exercises that help them to learn how to identify, modulate and control their arousal level. They may also perform Kegel exercises to strengthen pelvic floor muscles; evidence has shown that this can alleviate PE.

While some men get help from a sex coach or a therapist, others rely on self-help exercise programs. 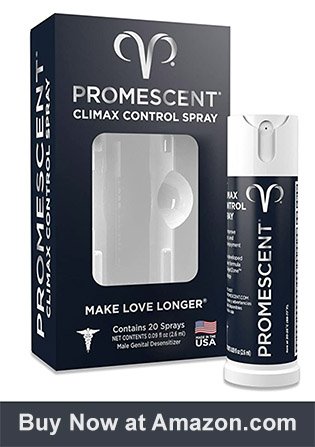 The FDA has approved two different active ingredients for use as desensitizing agents: benzocaine and lidocaine; both are local anesthetics. Clinical studies have shown both ingredients to be effective in controlling premature ejaculation. Note that lidocaine breaks down latex, so it should not be used with latex condoms!

One problem with delay agents is that when they come in contact with your partner, they can also decrease their sexual stimulation. In order to avoid this, a product called Promescent contains an agent that increases the absorption through the skin. When used as directed, it is not transferred to the man’s partner. A clinical study2 found that Promescent “appears to be effective in increasing the time to ejaculation and the overall quality of the sexual experience in men with subjective premature ejaculation.”

There are a number of drugs that have been shown to be effective in treating premature ejaculation. However, none of these drugs has been approved by the FDA for treating PE.

The most promising drugs for treating PE are specific antidepressant families, namely the Tricyclic Antidepressant (TCAs) and the Selective Serotonin Re-uptake Inhibitors (SSRIs).

The most effective SSRI for treating premature ejaculation is Paroxetine; it has been found the increase the time to ejaculation more than eightfold. However, it is also the most likely to cause erectile dysfunction3.

This website uses cookies to improve your experience while you navigate through the website. Out of these cookies, the cookies that are categorized as necessary are stored on your browser as they are essential for the working of basic functionalities of the website. We also use third-party cookies that help us analyze and understand how you use this website. These cookies will be stored in your browser only with your consent. You also have the option to opt-out of these cookies. But opting out of some of these cookies may have an effect on your browsing experience.
Necessary Always Enabled
Necessary cookies are absolutely essential for the website to function properly. This category only includes cookies that ensures basic functionalities and security features of the website. These cookies do not store any personal information.
Non-necessary
Any cookies that may not be particularly necessary for the website to function and is used specifically to collect user personal data via analytics, ads, other embedded contents are termed as non-necessary cookies. It is mandatory to procure user consent prior to running these cookies on your website.
SAVE & ACCEPT